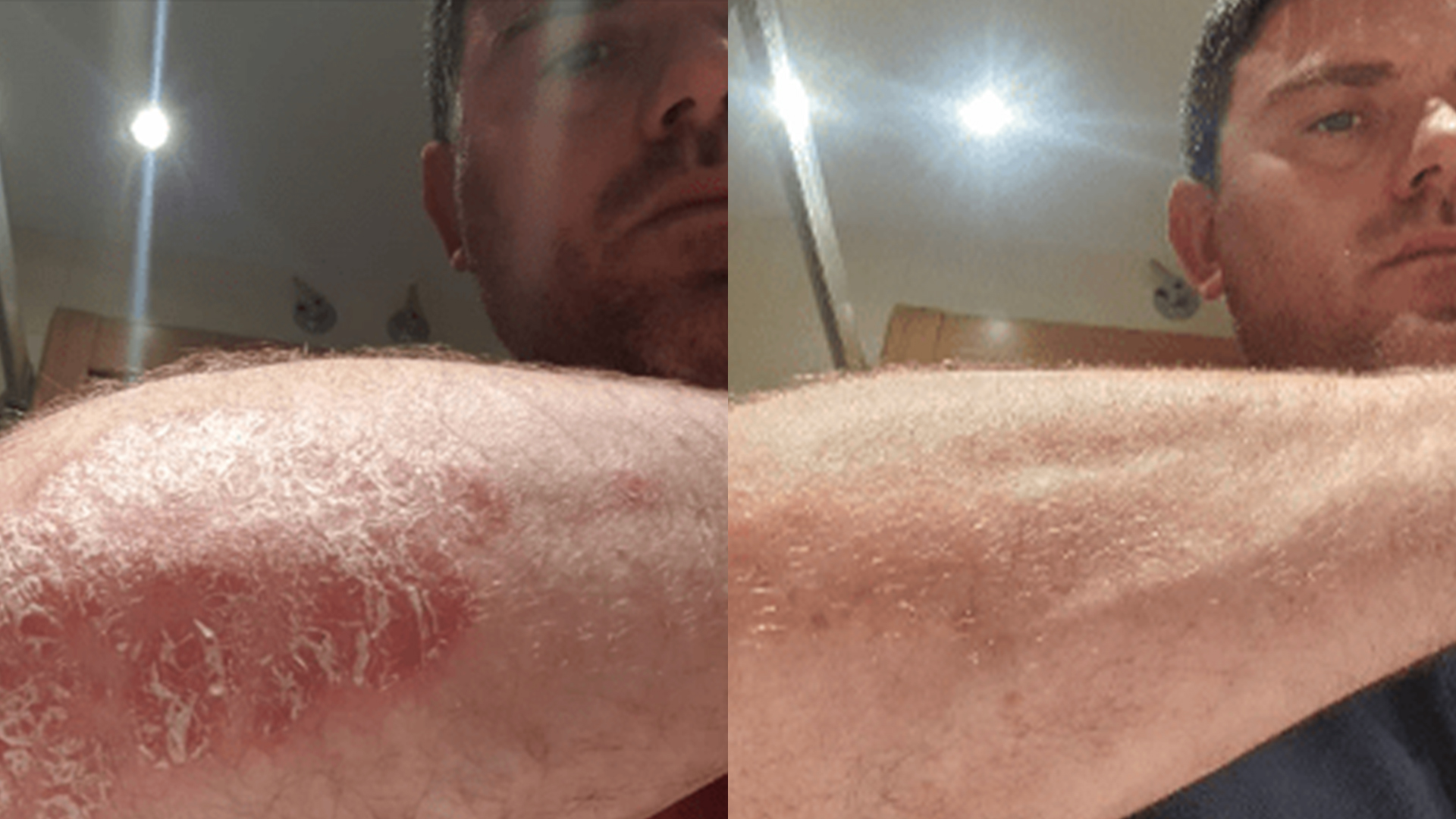 Tony Stevens, 45, from Liverpool, the owner of an English language school in Pamplona, Spain.

About 16 years ago I first spotted psoriasis on my knee. I was doing a Japanese martial art called Aikido a lot at the time and that involved me rolling around and doing techniques on my knees. Perhaps this was a trigger, who knows? After that, it just grew and grew surreptitiously and, eventually, it was out of control to the point that many other parts of my body, mainly my arms and legs, got affected too. Worse still, it then spread to my head, behind and inside my ears and groin, and that’s when my life changed.

At that point I felt I was in a prison made of my own skin, so I had no choice but to deal with it. I then became self-conscious and evasive. I would cover up all the time, even when the weather was great; the worst part was when spring came and people began donning their T-shirts and shorts while I looked ridiculous and out of place in my long sleeves and trousers. It was awful.

I teach in Spain, and classrooms here can get very hot, but I had no choice but to roll up my sleeves until my elbows were on show. And then I would catch students staring at my plaques, and as every psoriasis sufferer knows, that makes you even more self-conscious! It became an endless merry-go-round of hide and seek and I longed for the hot weather so I could ‘burn’ them all off.

To give you an example, during my battles with psoriasis there were many occasions when I got real nasty flare-ups over 24-hour periods and flakes would fall off me like there was no tomorrow. My wife used to call me ‘the snake’ because I’d constantly leave dead skin all over the house.

During my allopathic treatment, I took all kinds of steroids which were the bane of my life. I also had UV treatment for many years and that did help but it was inconvenient as it involved a lot of time and effort to get to the hospital for a few minutes several times a week over several months, not to mention the year-on-year additional radiation I was receiving.

Then I was introduced to Soratinex. Two years ago, my brother, Sean, who also had psoriasis, told me he had cleared his up with this product, but I was incredulous as I’d been disappointed so many times before. At that time, I only tried it half-heartedly and certainly didn’t use it properly or regularly – and then I gave up, as you do. Admittedly, I didn’t have the confidence that anything could work anymore so I had no trust in any treatment, much less any discipline.

Nevertheless, just before Christmas last year [2019] I had an operation on my leg and was laid up, so I had the time to use Soratinex properly this time and apply it religiously twice a day as directed by my brother [and FRANKL Pharma’s instructions]. I did that for six weeks, non-stop, until I noticed the huge patches on my elbows gradually receding, first from the centre and then outwards until they were completely gone. I was absolutely over the moon. By the time it got to June [2020] and swimming pools in Spain began to open again, I assure you I was the first to jump in!

In my opinion, it’s not easy discovering products like this that really do work. I feel so lucky, so I’m delighted to have the opportunity to leave a review here. I’m also telling friends and family of my success. In fact, during the lockdown, I hadn’t been able to get to my barber so by the time I had a chance to go for a cut, the psoriasis on my scalp had now gone and he just said, ‘Wow’. He had psoriasis too, so of course he’s now also using Soratinex.

To sum up, this product has been a game-changer for me. I’ve always been a happy person but with this my quality of life has shot through the roof. I used to look up to people with good skin and envy them, but now I don’t think about that anymore. Weather permitting, I just go out in my shorts and T-shirt when I want, with whom I want without a worry in the world.

This article was originally posted on: https://www.franklpharma.co.uk/article/tony-stevens 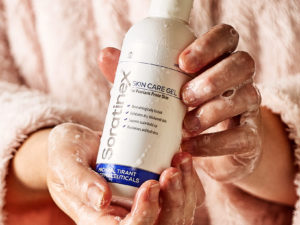 Soratinex Cleansing Gel is used for the care of dry, flaking and thickened skin of the scalp and body in adults. This formula contains exfoliating alpha hydroxyl acids combined with surfactants to cleanse skin and loosen the scale build up. 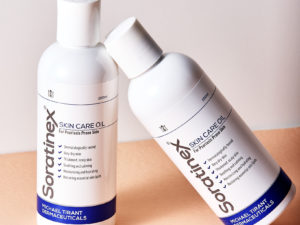 Soratinex Skin Care oil is perfect for the more sensitive of psoriasis prone skins and is especially suited to dry and flaky conditions of the scalp (think scalp psoriasis and dandruff).  This gentle formula is rich in plant oils which massage easily into the skin of the scalp and body to reduce flaking and dryness.  Apply to the scalp and leave over night at least 3 times per week for best results. Combine with the Soratinex Shampoo for general flakiness or with the Cleansing Gel for thick, plaque patches. 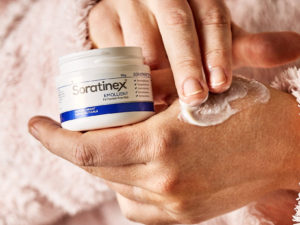 Soratinex Emollient was designed specifically with psoriasis skin in mind.  It is jam packed with over 18 natural active ingredients designed to deliver nourishing oils and protective antioxidants to where it is needed most.  It is best suited for thick, dry and flaky skin of the scalp and body in adults.